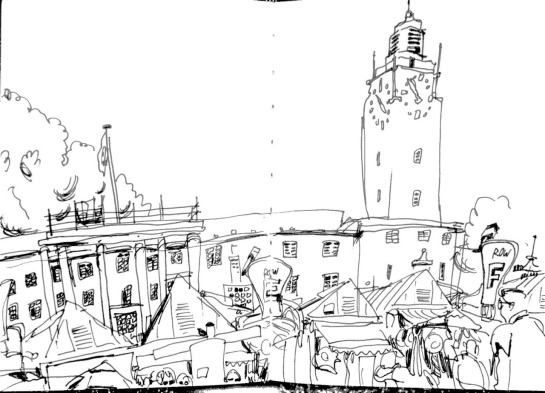 Three months later the same guy was dancing with the same woman on the same dance floor to the same five country songs that were played in a repeating loop into what seemed like infinity. Their dance moves had improved but otherwise it was the same army boy from five months ago, using the same words to get girls to dance with him, moving in the same way to the same beat.

Sitting there watching it all happen, the five-song playlist repeating again for the third time, it all was exactly like my picture of hell: A small square wooden dance floor, a repeating, circling square dance, people drinking and laughing but not really happy at all.

And everyone else doesn’t have any dance partner or anything to talk about. And they go through the typical 4 question cycle: Where are you from; What do you do; Do you like it here; Yeah me neither, so why do you stay?

And there is nothing really to talk about, nothing that matters, as everything fades into more and more of the grayness. The people are gray and the city is gray. And it is not beautiful, though the architects seem to think so. It is not good to be miserable. It is not good to laugh joylessly. Loud and empty laughter. Everything is shallow and the same, day after week after month. And the people who might have been otherwise turn harsh and critical and brash. And there is nothing much beautiful left in them. It seeps out through their eyes and evaporates with the tears that wash away the cigarette smoke.

Months go by and years and the same cement city streets are stomped and spat on and brushed clean. Bristle brooms stand on street corners to sweep it all away come morning. There is no hope here, only living. Only another weekend and more hours spent. More turns on the dance floor or swings around the pole in the middle of the basement bar. More attempts at getting women to go home with you, more cycles, going from one girl to another and whispering in any ear that will listen. Expensive cheap shoes well-shined and a fancy flip of a dance move that you’ve been practicing for ages because what else is there to do? People that don’t meet your eye and don’t speak the same language as you even when they do. And after all that it’s nothing, a walk down a steep hill, a taxi cab ride home, a silence at the end of it all. And tomorrow in the bar on the top of the hill across from where the nice ladies flash their bodies at strangers, that boy with the cowboy boots will be practicing his dance moves, and some girls will be sucking down weak jello shots that almost taste like strawberry, and those five songs will play, and mouths will smile but eyes will not.