This is it. This is the day I leave California. Leave LA, leave this beautiful ocean-bordered state and go back into the scorching desert.

Yes, all this is in the write-up for today, but we didn’t head back to Vegas first thing in the morning. Why? Well, one look at the weather forecast for Vegas gave us pause; it was 108 degrees there – at 10 in the morning – and it was only expected to get hotter.

Sure, that’s a dry heat, but, still, we decided it would be best to stay in LA’s cooler weather for a bit longer.

That was totally ok with me, because I really didn’t want to go back to Vegas at all. I wasn’t ready to say goodbye to California. Not yet.

So, what does one do in the middle of somewhere in LA with a few hours to kill?

Go to the movies!

Which is what we did – after breakfast, of course.

Breakfast. We were used to having breakfast at breakfast time at this point in our trip, so I whipped out my handy-dandy phone and used Urban Spoon to locate us some foodstuffs.

We ended up at this place called Dinah’s family restaurant, and my pancakes had strawberries on top of them and I had fresh-squeezed California orange juice and I was a very happy camper. 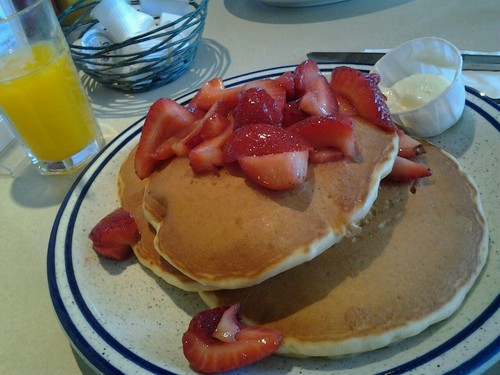 LA seems to be hectically busy at all times. Dinah’s was packed from the moment we got there until the moment with left, with the wait-staff eager for us to finish as soon as they set us down with fresh silverware. (I realized later that it was a Sunday morning… in LA… so, understandable.) Very busy.

I wonder if there are ever empty roads in LA, like there are at home in Michigan. At 3AM, is there still traffic on the 405?

Again, though, I will ask the question – What does one do when they’ve got a few hours to kill? (You, enthusiastically: “Go to the movies!!” Me: “That’s right!”)

We had to drive a whole 2 miles to the nearest movie theatre. Good grief, LA! We happened upon this cool little mall-sort-of-complex – with $2 parking! Hello! Will take!

Then, The Amazing Spiderman happened. During the movie, I found myself thinking: “Didn’t I see this movie already? Didn’t they just make this movie? Really, I’m supposed to believe that Emma Stone is 17 years old? Ooh, hello there, Andrew Garfield! Wait, he doesn’t shoot webs out of his hands?! WTF?” Etc.

It was a good flick, though.

Ok – I’m just stalling! The next part of my journey is coming up and I don’t want to think about it let alone write it all out in excruciating detail!

Then we left California.

Nicole drove, so I got to sit in the passenger seat and stare glumly out the window as LA disappeared, and the entire state of Cali flew by. It was honestly kind of a beautiful life moment, though. While I was in California, I realized how much more there is in the world that a lot of people miss out on. I don’t know why they do. Voluntarily. I found myself thinking that, in a year, after I graduate from college, I could move out there – to California. Or, I could go anywhere. It was kind of a wonderful realization.

Yes, I had to leave behind California and all of the wonderful places I had been – but, I could come back. Or, I could keep going – to new places; see the world.

The world is as big as you let it be.

We drove East to Vegas, (while I booked a hotel on my, yes you guessed it, phone) and spent the night at the Tropicana hotel.

Wait, no. There’s more! A lot more. We were in Vegas, baby! And we weren’t ready to stop exploring just yet.

Nicole had never been to Vegas, though as this was my third time there, and I felt like a Vegas pro. So, we wandered out to walk the strip – and find dinner, of course! Who do you think we are?

Uh, Vegas is hot. Like, really hot. Yes, sure, it’s a dry heat – but that’s like saying the inside of your oven is a dry heat. That’s pretty much where I felt I was – inside of an oven – as we journeyed down the strip and snapped some photographs. After a half hour of baking, we decided to duck into Outback Steakhouse, and out of the heat.

I then proceeded to guzzle down three glasses of water.

Nicole got her steak, and I my burger and fries, and we sat there munching happily as the cute waiter guy came back every 5 minutes to refill our water glasses.

Oh – did I tell you the story about the waiter guy? No? Let me fill you in!

He was cute. And funny. And, it turned out, from Michigan! Just like we were! Was it a sign?! Also, he was pretty great at bringing us water. That’s how you know he’s a good catch.

Anyway, that happened, and we left Outback with very full stomachs – and my number on the receipt! Oh my god! That happened! Yes, it did!

It was kind of a big deal to me – I don’t give random guys my number! But, hey, I do now. Or, maybe I only do that in Vegas. (What happens there…)

He wouldn’t text me anyway, right? It was just a funny, exciting thing to do.

We pretty much ran out of that restaurant so we wouldn’t see him on the way out. So much for us being daring souls, right?

Then, back to the Tropicana. We were so tired! Stretched out on our (very comfortable) beds, we watched T.V. for a little while. It was getting late. Wait, no, it was late! It was midnight! When had that happened? Time for bed?

Then, I realized, we hadn’t had a drink yet.

When we first set off on this adventure, we talked about how one night we should go to a bar and have a drink. Newly 21, this sounded like an exciting idea to both of us. However, we found ourselves there, in Vegas, on the last night of our trip, with no drinks on our record. What? Unacceptable!

So, we went out. Again. Into the Las Vegas night.

And it was still fucking hot. 110 degrees at midnight? Really?

Nicole was on a mission to find an icy sort of fruity drink. What we ended up with was large cups of pink, icy, pretend-strawberry margaritas. Honestly, I have no idea what they were. We found an outside bar (with these cool fans that blew water on you!) that had some sort of pink business sloshing around inside a machine, and ordered two. 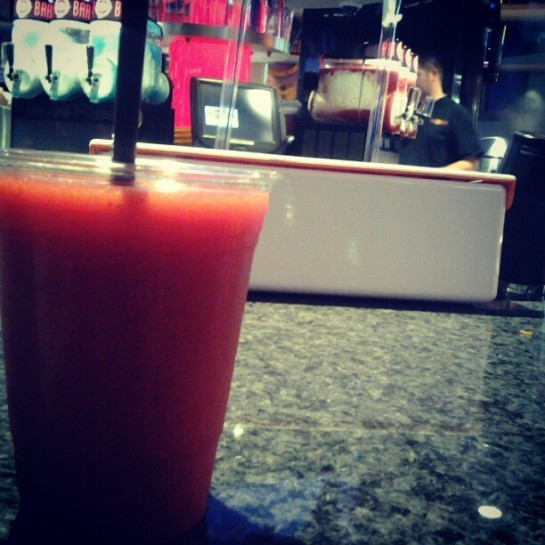 It was really, horribly strong. But I drank the whole thing. With lots of grimaces.

Then, we went back to the Tropicana and went to sleep.

Oh, wait! No we didn’t! I mean, yeah, that was the plan – but then waiter guy texted me!

I may have been a little too excited about the whole thing, but I’ll just blame that drink I had. Anyway, I then busted into the bathroom while my friend was in the shower and proceeded to cackle hysterically while attempting to explain that the waiter guy had just texted me.

It was a good night.

It was a good last day of our vacation.

And as I continued to cackle for the next hour or so, I realized that we still had almost an entire day left of our adventures before our plane ride home. The fun wasn’t over yet!