What did you do for the fourth of July?

I spent mine watching fireworks at Venice Beach – on the pier, over the ocean, with several dolphins and three pelicans.

I can’t believe this place called “LA” is real. It’s so… strange.

Then, right next door, there is the city. It’s huge, and beautiful in an ugly way. That makes sense, right?

Both of those things are wonderful to find in a city. It’s just a little overwhelming to have both, and so much of, in the same place.

It’s an interesting contrast, that’s for sure. And, so, as I approached my third day as an Official California Tourist, I wasn’t yet sure how I felt about LA.

We spent the morning… sleeping in.

Yes, we were tired out, ok? Lots of walking and sun will do that to a person.

Around noon we piled our starving selves into our car and headed towards Santa Monica Pier. I’m not kidding, that’s what I typed into my GPS – which is how we found ourselves driving up the road that the pier is on. It sort of just a-pier-ed in front of us. (Yes, I went there.)

Then, the walking began. And didn’t end until 11:30pm that night. Saying our feet were sore is putting it lightly. 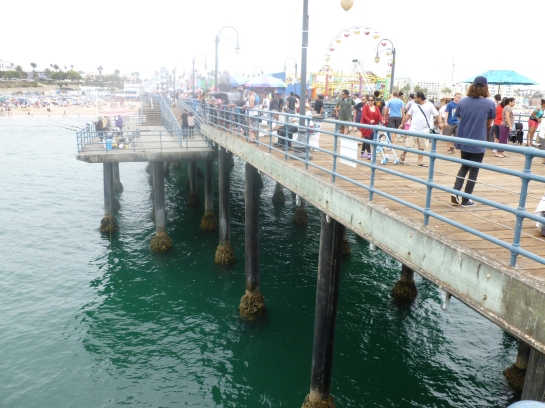 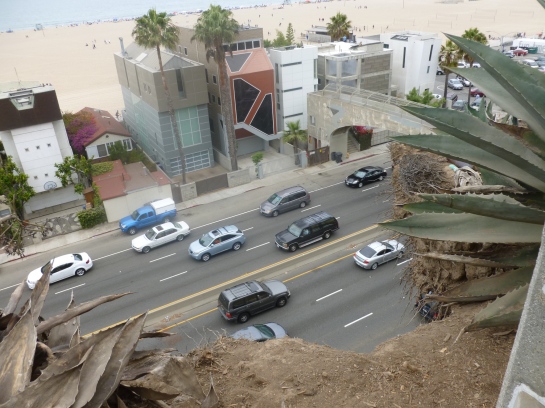 But I was ok with the extra-large blister on my heel – the walk was beautiful (how many times have I used that word? sheesh…), the people were interesting, and the fireworks were everywhere up and down the coast.

(Side note #1: A Canadian couple on their honeymoon asked me to take their picture on the beach and I did and it was super adorable! Side note #2: When I was “napping” on the beach I got hit by a stray frisbee – ow! [But, a good way to meet guys… yeah?])

On the four mile walk (!) back to our car, the boardwalk shops of Venice Beach were locked up tight for the night, and it was strange to see how quickly a bustling locale had changed into an apocalyptic boulevard.

Just across the walk, away from the successful shops and rich-people’s oceanfront homes, were the homeless.

I’ve been around homeless people before, but not like this. There were a lot of them, and they were all lying down, wrapped up in blankets and plastic, surrounded by shopping carts and overfull garbage bags.

It was sad, and quite a picture of the diversity of wealth in America – the richest, and the poorest, separated only by a ten-foot stretch of pavement. 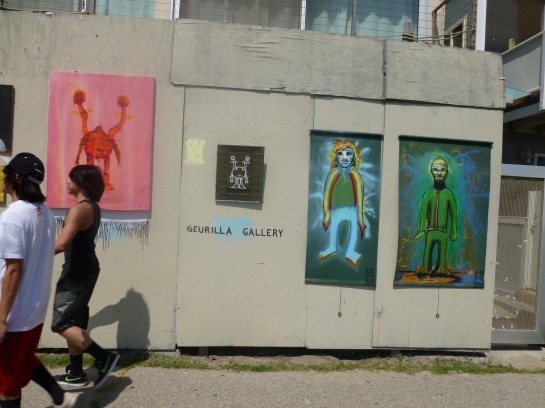 I suppose this is another element that is commonly found in California. People of all sorts, like I said.

Should LA be an easy city to love? Should I know right away how I feel about it? Why is this city so puzzling to me?

Anyway, here’s something I heard a LA local say (while she was laying on the beach):

“Isn’t our life rough? This is why we can deal with the traffic and the pollution – we have this!”

Is that enough? Are the two sides of LA (nature vs. humanity) equally balanced? Will I ever figure this city out?

Anyway, on to San Francisco!